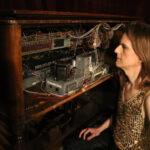 In this day, April 24th, in 1934, Laurens Hammond filed the patent for the Hammond organ. I wonder if he could ever imagine what he was about to create? That more than 80 years later, people would still consider his invention as one of the greatest musical instruments ever? Not everyone does, of course, but I sure do and probably many with me!

I thought I would be nice to start with the very first song I heard being performed live on a B3, the Jimmy Smith blues “Blues for J”. Medium blues in F, always a safe bet.

Also, to celebrate the occasion I wanted to show the inside of the organ. Those who haven’t seen it are usually ämazed by the ingentuity of the instrument. The core of the organ is the tone wheel generator that houses 91 one spinning metal wheels. So what better song to play after that than spinning wheel?

I thought also that I would play a few classics this time and “A whiter shade of pale” is always one of the first to come to mind. Love that song.

Thereäs son many sides to the Hammond organ. You can play jazz, rock, gospel and blues, Just about any style has it sound. Generally I love them all and each has its charm. And to further vary the set and show the sounds of the B3 I wanted to play some Happy hammond. I have a vinyl record called “Hammond Tanz Party” (Hammond dance party) and on that there’s this version of Nola. I love it!

Another one of the first songs I heard on the B3 was “South street stroll”, played by my soon-to-be-mentor Pierre Swärd. So here’s that version.

One thing that makes the Hammond organ so special is that it has such great dynamic capabilites. You can make iot sound just as big as a big band and that’s what organ players like Wild Bill Davis did. Here is his version of “April in Paris”.

Then just a blues to cool things down – Please send me someone to love . If you have followed me for a while you know I love the old school sound as well. Mr Sandman is such a nice tune and a great contrast to the other songs.

Jack McDuff was one of my early favorites on the B3. So here’s one of his songs – Hot Barbecue.

As an encore I went with the Charles Earland classic- The mighy burner.