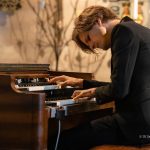 The international day of workers, right after the international jazz day. What a an interesting combination! There are also some birthdays to celebrate, for example Duke Ellington and Toots Tielemans. Needless to to say, it wasn’t that hard to find songs to play for this stream.

I thought a good way to start would be with a Duke Ellinton classic. It’s hard to rank his vast repertoire but this was certainly one of the first Ellington songs I knew – Take the A-train.

Then a song for the workers, “Work song” by Cannonball Adderly. This one in a more funky version.

My favorite Toots Tielemans tune has to be “Bluesette”. In Sweden it also has another meaning after being recorded with Swedish lyrics by Monica Zetterlund. The title the is Monica’s summer waltz” and it has become THE jazz summer song here.

Toots Telemans also worked a little in Sweden. one thing he did was to write music for the children’s movie “Dunderklumpen”, that I watched and loved as a kid. One of the best tunes of the sound track is “Jätten Jorm’s sång”, a song about the giant Jorm who’s really a mountain that can walk around a take a swim in the lake, which he loves.

Another anniversary that isn’t much to celebrate is the 35 years that have passed since the Chernobyl nuclear disaster. But it is worth remembering and contemplate I think. It could have been so much worse and it’s important to realizre what we are dealing with nuclear power. For this I thought that the Kraftwerk song “Radioactivity” would fit.

Then for something happier. One of the most well-known songs related to work has to be Dolly Parton’s “9 to 5”. After having played around with it I found a funky way to play that felt fun and fresh.

Regarding the interscetion of the jazz day and worker’s day – a jazz version of The internationale seemed like the most obvious choice.

I started the set with Duke Ellington and why not end it on the same note. “It don’t mean a thing (if it ain’t got that swing)” is another one of Duke Ellington’s classics for sure.

As an encore, I thought a march would be suitable, as May 1st is usually the day to go out marching. I’ve been planning on playing “Bues march” for a while and this hade the perfect occasion.

Hope you enjoyed the stream and see you in the next one!