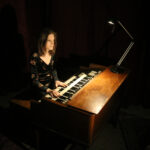 The very first jazz organ concert I ever attended was in my late teens in my hometown of Borlänge, and one of the songs played that night was Herbie Hancock’s “Watermelon Man”. It was was my soon to be mentor Pierre Swärd and his trio that played and it launched my passion for the Hammond sound. Since Herbie Hancock had his 81st birthday this week I thought it would be a nice way to start the with “Watermelon man”. Then a song for Bessie Smith – “Nobody knows you when you’re down and out”.

Next week, in my “Jazz at the HQ” series I will do a concert with the duo “Apan & Grisen”, featuring also drummer Daniel Olsson. We’ll be playing mostly my own music, so to give a taste of that I put “Danslåten” (the dancing song) in the set.

Another birthday this week was British guitarist and singer Dave Edmunds. My dad had a few records of his that were played a lot when I grew up. There was one record “Riff raff” that we had on cassette and a vinyl single “Singing the blues”. So I played first “How could I be so wrong” from iff raff and then Singing the blues. It used to be my dad’s favorite tune so this one was especially for him.

On the last stream when talking about Henri Mancini I was asked if if knew the Pink Panther theme. I know the melody very well of course but haven’t played it much so I looked it a little more and had fun playing it here.

Then another blues for Bessie Smith. And many others of course. I’d say you don’t need any special reason to play St Louis blues. It’s such a nice tune.

Earlier in the week there was the anniversary (62nd I think) of Jurij Gagarin’s trip to space. I came to think of the Swedish trio EST, with Swedish piano player Esbjörn Svensson who sadly passed away far too early some years back. They did a song called “From Gagarin’s point of view”. I think that’s a great title for a song and it really fits the composition. Makes you think – what did he see and think up there where noone had gone before. A bit of a challenge to play the song on the organ but it worked out well.

Then to another one of my favorite organ players – Latrry Goldings. Here is one of his earlier compositions – Slo-Boat. A song I have always liked very much.

Then for the finish – another tribut to Herbie Hancock with Chameleon. A fun song to play because yuu get to use the whole pedal board the the whole organ.