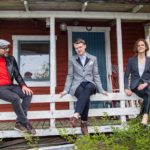 Trinity recorded their third album which will be out in March. We used the studio where that I rent with Janne Jutila (who has the studio) as the recording engineer.  In the picture you can also see producer Daniel Lantz.

Palli Kristmundsson was there and took some really nice photos.
Check out his blog: http://2or4.se/trinity-spelar-in-ny-skiva/
And the gallery: http://galleri.2or4.se/Musik/2014/trinity-skivinspelning-9-januari