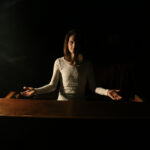 This Saturday is the very date for the spring equinox. A point of balance between light and dark. A day of unity in the sense that day and night is equally long all across the globe. And here on the northern hemisphere – we’re also heading towards lighter times! So, that’s the theme of the stream. As usual,, with jazz, blues, groovy beats and who knows what else. Tune in and join the fun!

This stream coincided to the very date with the Spring Equinox. The more I thought about it, the more I was intrigued by the whole concept. It’s like a point of balance between light and dark. The midpoint in the journey from winter to summer, and also the tipping point from where there is more day than night (at least in the northern hemishpere. You can also see it as a day of unity in the sense that on this particular day, everyone across the globe gets the same amonut of day and night. We share the sun and the moon. For me personally, the move towards lighter times really brightens my mood. So this is a stream of celebration!

In the spirit of unity I decided to start the stream with a Beatles classic, “Come together”. A nice groovy song to get started. I also wanted to get the information out about my other series of concerts with bands that started about two weeks ago. Every other Wednesday there’ll be a stremed concert with one of the bands where i play, and the next concert is Trinity, a trio that has been playing together for more than 15 years. So I played one of my songs that we’ve been playing with that group, “Swing for Elina”.

The Swedish word for Spring Equinox is “Vårdagjämning” and I had to look up the translation. When I did it I realized there are a few songs with the same name. One of them is the Coltrane minor blues “Equinox”. I used to play it on some of of very first concerts long ago and this seemed like a grat opportunity to play it again. After the first two songs it was nice with smething more mellow.

With this theme there are a million ways to go when it comes to choice of songs. Since the equinox is the balance between day and night, I thought Cole Porter’s “Night and day” would be appropriate. Here in a bossa version. And the next was Duke Ellington’s “I’m beginning to see the light”, looking forward towards lighter times. Just earlier in the day I came up with a way to play it as a blues shuffle. Thought it worked out nicely!

Then for something more calm and solemn again. A few years ago I aplyed at a funeral, and I was asked to play “When you’re smiling”. I made an arrangement more suitable for a funeral and I thought it would be nice to put into the set here.

Then for this week’s challenge: When I was younger I had a period when I was listening quite a lot to Jean Michel Jarre. Some of his music was also featured in video games so some of it you might have heard not thnking of it. Anyway, he has a record named Equinoxe and I wanted to play one of the songs from that. They are just named by number and I chose “Equinoxe no 5”. The challenge is to make the music made for synthsizers work for Hammond organ. Did it work? Take a listen!

This past week also saw the birthday of Nat King Cole so I wanted to play some of the songs he used to do. One of my favorites is “Walking my baby back home”. Although, in Sweden is more known under it’s Swedish title “Sakta vi gå genom stan” that Monica Zertterlund recorded in the 60s.

Also, Quincy Jones had his birthday so I wanted to honor him in some way. It’s always fun to find songs that are not the most expected and I’m sure this fits that category. Even though I haven’t wathed the sitcom “Sanford and son” myself, I have always liked the theme song, composed by Quincy Jones. So that was the final song of the show.

Then a few encores. First “Take five”, that has been requested a couple of times. Though, I haven’t plyed it in a while so I think I will have to redo it. After that I ended the session with “Route 66”. Hope you enjoy it all!