One of the effects of the pandemic was that it forced musicians to think in new ways. One of them was to find smaller units and constellations for cocnerts, as the limitation on audience often also puts limitations on the financial outcome. Me and Claes have been playing together for a number of years in different ways but it was just now that we started working more deliberately on this duo project that we had been discussing for a while.

It’s such a nice setting – Claes with his broad repertoire, spanning jazz. blues and other songs, both in Swedish and English. And then a B3 to accompany him. And since I’ve een listening to a lot of his records over the years, it’s such a joy to get to play many of those songs!

The repertoire for this concert is mainly from Claes’ latest studio album, “Ett ord till mina polare”. We kick off the set with the title track. It’s actually, quite a sad song about friends passing away, although it might not sound as sad if you don’t know or understand the lyrics. A song sadly suitable for these times.

Claes also does a lot of Ray Charles material. The second song is “Hard times” but with Swedish lyrics, titled “Brorsan”.

The day before the stream was April 6th, which is the birthday of Billie Holiday. She would have been 106 this year. So what could be more appropriate than to play “Ode to Billie” in her honor? The song is actually “The man I love”, with Swedish lyrcis, with a celebration of her life and music.

And then for another great song from the American songbook – The very thought of you, This one also with Swedish lyrics, written by Claes himself. Here it’s called “Jag har en tro på dig”, roughly translated “I believe in you”. He recorded it long ag o on his ablum “festelser” an I’ve loved that version ever since I heard it there.

Many of the lyrics that Claes sings are written by Hans Widmark, father of pianist Anders Widmark. Most of the lyrics on “Ett ord till mina polare” bear Hans’ signature. For example the next two, “Stjärnfall” and “En halv visa om våren”. The first one about life in a Stockholm suburb, how time passes and how dreams not always come true. The other one is a song about the seasons. It was menat as a song about apring, but as it turned out the other seasons were included in the lyrics as well.

Just about 10 years ago, one of Sweden’s beloved actors and writes Lasse Eriksson passed away just after finishing a show at one of the theatres in Uppsala. He and Claes were close frineds and just before he had written Swedish lyrics to Charlie Chaplin’s “Smile”. A it turned out, the first time Claes got to sing it was at Lasse’s funeral. A beautiful song, nonetheless, both in English and Swedish, and here Claes does both versions.

For the end of the set, we did two songs in English. First up, “When Sunny gets blue”. A beautiful ballad, here in the arrangement of Kjell Öhman. Then for my favorite in Claes repertoire – he was part of Öhman Organ Grinders, Kjell Öhman’s band during the 90’s. This was one of my first inspirations when it comes to organ jazz. They made a record “Live at the pawn shop”, record at the legandary club Stampen in the Old town of Stockholm. the last song of the album is Fats Domino’s “I’m walking” and that has always been one of my favorite songs.

Then, there are these songs that you just “have to” play. Claes’ biggest hit over the years is “Har du kvar din röda cykel” and that song is requested at almost every concert that he does. So we thought it would be a nice way to end the show. 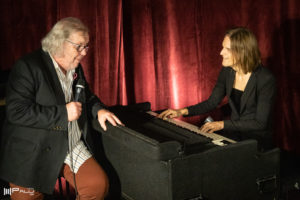