Pentecost stream on the Hammond B3

Pentecost used to be a three day weekend in Sweden, with the monday after the weekend being a red day. Though, after they made our national day June 6th a holiday they removed Pentecost monday. So this weekend passes quite unnoticed nowadays. I was thinking of why we celebrate it, how the holy spirit filled the apostles so they would speak other tounges. On this partcular day as well, the final of the Eurovision Song Contest was held. So I thought a theme for the stream would be voices. And more to that – Sweden’s song in the contest is named just that – “Voices”! During the week we have also celebrated the birthday of Fats Waller and Norway had its national day. So I thought that would be fun to bring in as well.

But the set started with a 50 year anniversary. It was around this day in 1971 that Marvin Gaye, one of the strongest voices of his time, released “What’s going on”.

Then a tribute to Fats Waller with “Honeysuckle rose”. Great song for some hard swinging jazz and fat block chords.

I thought it would be fun to also play the song “Voices” from the ESC.

WIth the theme being voices I also decided to fulfill a promise I made in an earlier stream, and that was to sing sonme tunes as well. One jazz standard that I have always loved and actually sang on a few occasions is “My shining hour”. But I have to say, both a bit scary and fun to do my singing debut in these streams, though I think there’ll be more of that.

The next section of the show was dedicated to Norway so I began by playing their national anthem, “Ja, vi elsker dette landet” in a version that I arranged and recorded last year. A lot more jazz and gospel chords than how it is usually played and I like that.

One of the Norwegian artists I work with is guitarist and singer Hans Bollandsås and we’ve done a few tours under the name Hans Bollandsås & Andreas Hellkvist In Concert. We’ve been playing mostly his music, some opf mine and some blues and soul standards. A beautiful tune of his is “Confession” so I thought I’d play that first. Another song of his that I really like is “Same old boogie” but we haven’t played it very much. So that became my other singing tune this stream. A bit more challenging than “My shining hour” but a lot of fun. I like the lyrics, but luckily I can’t really relate to it.

When I was starting to play the Hammond in the 90s, the Norwegian quartet The real thing was a great influence. I got all their records and listened a lot. “Waffle shuffle” is a tune that I have played and listened to a lot over the years.

I thought I’d end the set with another Fats Waller tune, this one being “Ain’t misbehavin'”. Love that song, and I think it sounds nice with a more old scholl organ sound.

During the streams, you never know what requests will come up. Sometimes you just make note of them but not play and sometimes you put them in the set. This time it was a case of the letter. A friend from Kansas requested “Purple rain” and it seemed like a nice encore to do. With that, the stream got a realy nice powerful ending.

Hope you enjoyed it and see you at the next stream! 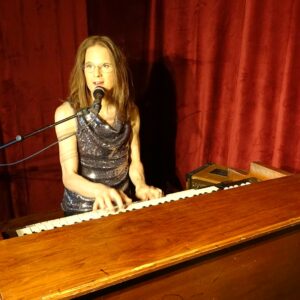