Doing the Saturday streams has been a way to keep practising, learning, discovering and developing in the absence of “normal” gigs. It has been a challenge to find a theme, a repertoire and an outfit for every occasion. But also incredibly rewarding, I think I have grown in many respects and also learned a lot, both when it comes to music, tech stuff and myself. It has been the primary “anchor” of the weely routine. Something to look forward to and work towards. The community of people around the world that has formed and followed the streams is also amazing. And I am so grateful for that.

Though, I have also felt that I do need a break. To free up some time to focus on other things, and maybe actually to have a Saturday off. Don’t know about the last one though… So I decided that this stream would be the last for a while. It also felt like the time was right to do it. Summer is approaching, people spend more time outdoors, normal gigs are being booked and corona seems to be going away.

One thing that makes the last week of May special each year is my birthday on the 26th. This year it was five years ago since I had this big birthday concert and release on Katalin in my hometown Uppsala. I played with three of my bands- Trinity, A tribute to Kjell Öhman and the release concert of Finally!. One of the craziest evenings I ever experienced musically and such a fond memory. So I thought the theme for today’s stream would be reminiscing about that. All the songs I played are fetched from that night.

One of the first songs I ever wrote on the organ, and the first song of Finally! It foten functions as a kind of theme song so I thought it would be a nice way to start this show.

So far, “Midnight Cruiser” is the only song I haven’t played on any stream. On live concerts we susually play it after “The Hellkvist Shuffle” so it was a given second song.

On the sunny side of the street

“On the sunny side of the street” is a song that has been on Trinity’s repertoire ever since the start in 2005. A perfect song for this day because it was the first real sunny summer’s day in Sweden.

This is one of my compositions that have been meaning to play on one of the streams but it hasn’t happened yet. It strikes a more serious and melancholic tone than the other songs, as the title invites you to reflect. And unfortunately, I think many can relate to lost love this past year.

Kjell Öhman was one of my biggest inspirations on the Hammond. “Alice’s fax” is one of his own compositions. A bebop blues with a brilliantly written melody.

You can’t have the cake and eat it too

One of the gifts I got on my birthday after I started playing the Hammond was Öhman Organ Grinders’ “Live at the pawn shop”. If you haven’t heard it, check it out! One of the songs, “You can’t have the cake and eat it too”, on that album is written by Claes Janson. I have listened to it so many times, I have played it many times but I have never sung it. So today was my first attempt at that. A lot of fun!

Kjell Öhman’s most iconic record is his “Kjell Öhman plays organ jazz” from 1968. On that album, there’s a song called “Feppe” which is my absolute favorite. Party jazz at its best!

The last song of the “Live at the pawn shop” record is Fats Domino’s “I’m walking” and that have always been one of my favorites, as well as my dad’s. So this one was especially for him. I usually play it instrumentally but this time I sang as well.

It’s hard not to get sentimental and there’s so much that I am grateful for. So here’s the speech

But let’s go out with a bang! Up and away is one of the most fun and upbeat songs on Finally! A concentrated portion of love and joy. A nice way to end these 27 fabulous weeks!

Thank you all for watching! Stay tuned because there’ll be more stuff coming out. See you soon. 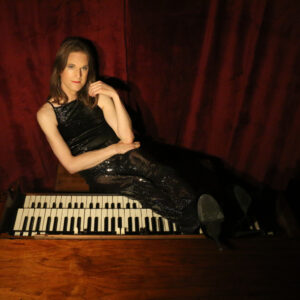