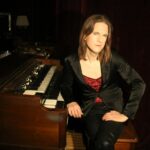 Springtime stream on the Hammond B3

Spring seems to be around the corner, at least in Sweden. So let’s ceebrate that! Jazz, blues, groovy beats and who knows what else. Tune in and join the fun! Tips appreciated but not required https://paypal.me/andreashellkvist​ Swish: 070-9840244 (Sweden) #andreashellkvist​​ #hammondb3​​ #livestream

A springtime stream indeed! The last couple of days has been some really beautiful spring days. The snow has melted, the sun is shining and even though it’s windy, they aren’t cold winter winds anymore. So I chose a few songs for that, one of them combining the birthday of George Harrison – “Here comes the sun”, of course. As a tribute to George I also wanted to do “Something”, my favorite George Harrison song (I think).

Also celebrating the birthdays of Max Martin with a boogaloo version of Can’t stop the feeling, and the birthday of Fats Domino with Blueberry hill.

But the set started with Driftin’, a Herbie Hancock classic that I have played a lot over the years. We recorded it on the first Trinity album Paris Eyes.

One song that I’e had on my list for a long time is Paul Simon’s “Still crazy after all these years and today became the day to play it. Love that song.

One of the first CD:s with me as a featured artist is called “Rock-A-Hula baby and other movie songs associated with the king“. A collection of 5 Elvis songs played in a happy hammond style. I included the title track from that album. A fun song for sure!

The set ended with “Up and away”, an original of mine from my record “Finally!“. A nice way to end the show.