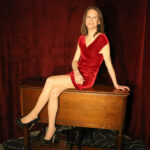 As the title implies, red will be part of the theme. We’ll see in what way. Also I’ll be fulfilling some requests that have been made the last couple of weeks. As usual, with jazz, blues, groovy beats and who knows what else. Tune in and join the fun! Tips appreciated but not required https://paypal.me/andreashellkvist​ Swish: 070-9840244 (Sweden) #andreashellkvist​​ #hammondb3​​ #livestream

Sometimes it’s really easy to find a theme for the stream. This was definitely one of those times. A color is often a good starting point and with the red dress the choice was obvious.

Way back I used to play at student clubs in my hometown, often just with a drummer. We would often open a set with Billy Cobam’s Red Baron. A nice groovy song to get started playing. So I thought I’d do the same this time.

Then another song in the theme – Red top. Through the years I’ve listened to it mostly with Öhman Organ Grunders (with Swedish Hammond player Kjäll Öhman). A fun jazz blues for sure.

Just before I started streaming I saw that that it weas Ben Webster’s birthday. Unfortunately I didn’t have time to prepare a song but thought I’d play Old Folks in his honor. One of my favorite jazz ballads. Trinity recorded it on our first album “Paris eyes”.

Another big birthday this week was of course Aretha Franklin. So I felt I had to play at least on Aretha song and decided on “Since you been gone”. Always liked that on but haven’t played in a while.

Earlier in the week I’d been listening to Billy Preston playing “Drowning in my own tears”. Also a song that I’ve heard so much but not really played. A nice opportunity to change that!

In Sweden the normal retirement age is 65 years old, and it just happens to be exactly 65 years ago Elvis released his first album. One of the songs featured on that album that I have always liked is “Trying to get to you”.

One of my favorite Jimmy McGriff albums is “A bag full of soul”. It has great songs like Boston bust out, D.B. blues part 1 and – Red river blues. A hard swinging version of Red river valley.