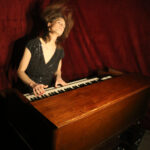 One year ago, around this weekend of February I did my last tours before corona hit. So I thought a little pre-corona nostalgia might be nice. Jazz, blues, groovy beats and who knows what else. Tune in and join the fun! Tips appreciated but not required https://paypal.me/andreashellkvist​ Swish: 070-9840244 (Sweden) #andreashellkvist​​ #hammondb3​​ #livestream

At this time one year ago, everything was just rockin’. I had made a small tour with Trinity earlier in the week. Over the weekend I went to celebrate my dad’s 80th birthday by throwing him a party, bring the B3 and play some of his favorite organ tunes. the week after the was a short tour with Kiralina Trio. After that everything went blank in the calendar. So, after a year with corona I thought a suitable theme could be to have some nostalgia and remember the times before.

So the set list has a few Trinity tunes, a few gospel tunes and a special feature for my dad (who now is turning 81). When I was younger he used to play a record with Jimmy McGriff’s “All about my girl” was the first song. I think that actually was my first exposure to organ jazz, although I wasn’t aware of it at the time.

I’ve heard the jazz standard “Some other time” many times, mostly in different versions by Bill Evans. Here I play it as waltz and it turned out nicely.

Also thought I’d try something new by paying a Vulfpeck song. Their music is kind of a happy place for me and I have listened to ita lot but never really played it. So do to “Animal Spirits” became the challenge of the week. And speaking of happy places – Billy Preston always puts a smile on my face with his music so I almost always put one of his sons in the set. This time I thought I’d do one I havn’t done before, namely “The octopus”.