Today was really exciting! First concert in a new series of band streams, called Wednesday jazz at the HQ. It felt like turning the studio into my very own jazz club. Every other Wednesday there’ll be a streamed concert with one of the bands with whom I play. This first trio felt like an appropriate choice to start the series. It was formed in the “corona summer” och 2020 and we’ve been jamming and rehearsing to find our thing. This also was a great opportunity to try another corona project of mine – to combine the piano with bass pedals. The trio is also a musical meeting between generations. Both Erik and Oscar is significantly younger than me, but as often with jazz music, age is of little importance.

Playing the piano instead of the organ allows for some other choices of repertoire and that really fun. I’ve always loved Oscar Peterson, so to open the set with his version of “Night train” feels like a nice way to start. A few weeks back back on a rehearsal we tried out “It might as well be spring” in a samba version. It worked out very nicely and so we decided on that for the second song. I used to listen to it on a record with Kjell Öhman and Lars Erstrand. It’s one of those songs that brings me to my happy place. And although I’ve listened to it a lot over the years, I think this was the first time I played it live. And there’s more songs like that. One of my favorite jazz songs ever is “Crooked creek”, especially the version by Brian Blade fellowship and that has become a favorite also in this group and was the third song of the nght.

While some songs has been with you a long time, others you have hardly heard or played. For me, one of those is “Spring can really hang you up the most”. Erik suggested it on a rehearsal and we put it in the set list. Beatiful ballad, suitable for the season.

At the time when I started to take an interest in jazz musc, way back, there was a TV show on Swedish television called “Jazzduellen” (The jazz duel). Each program featured one instrument where an older estblished player would meet an upcoming young cat. There would be some interviews and they would play some songs. one of the shows in this series (of sadly just three episodes) featured guitar players Rune Gustafsson and Rolf Jardemark. The first song that Rune played was “Cubano chant” and that’s also one of those songs that was been with me ever since. And today was the first time I got to play it! Actually, I found the very episode of the TV show on youtube, so do have a look!

“So what” is one of those songs where the music just float around in the room and you feel like being more than playing. I love the mood it creates.

Another favorite is Roy Hargrove’s “Strasbourg/St. Denis”. A perfect song to play towards the end of the set. And a that we pick up the tempo a notch with Charle Parker’s “Anthopology” with was the last planned song of the set.

Afterwards someone asked us to play a minor blues and we did that as an encore. “Brik’s works” was a nice way to end this hopefully first on many evenings of “Wednesday jazz at the HQ”. Thanks for tuning in!. 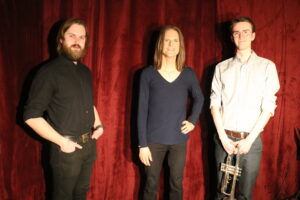