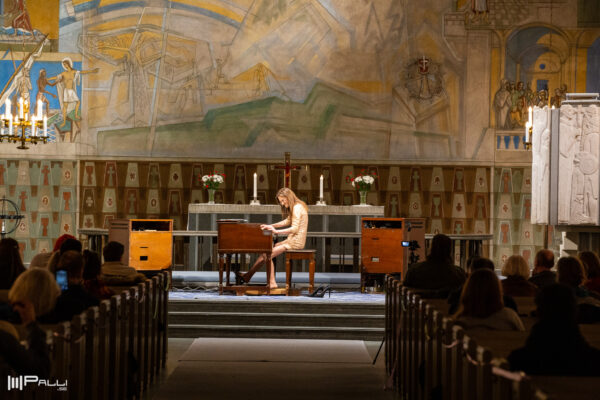 What a wonderful gig to break the last Corona hiatus! Church organist Gabriella Sjöström invited me to do a joint concert with both church organ and Hammond. St Göran's church has a wonderful acoustic and I decided to bring the big guns, that is, my B3 with two leslies. They both looked and sounded great in the room! Read more
November 13th, 2021 9:00pm

In Sweden this year, Father's day is celebrated on Nov 14th. Since my dad always have loved blues and hard swinging shuffle I thought I'd dedicate this stream to him. A trio setting with Thomas Arnesen and Daniel Olsson seemed perfect for the occasion. Read more
August 5th, 2021 8:00pm

For a number of years, I've had an ongoing collaboration with Norweigan friends Hans Bollandsås and Helene Misund. They live in the Trondhiem area so it's not that close, but every once in a while we get together for a few concerts and some nice hang. This time they made the trip to Uppsala and we started out by doing a stream from the HQ. This was also the first time that drummer Ola Bothzén joined the group, which turned out great! Read more
June 2nd, 2021 7:00pm

Jazz at the HQ – Kiralina trio

Playing with Kiralina and this trio is always such a joy and this time was no exception. Gospel songs and jazz standards, played in our own way. Read more
May 29th, 2021 6:00pm

Remembering my birthday concert 5 years ago, where I played with Trinity, a Kjell Öhman tribute and had the release of my album Finally! This also was my last Saturday stream in a while so it was a little sad as well. Read more
May 22nd, 2021 6:00pm

Pentecost stream at the Hammond B3

Celebrating Pentecost on the same day as the European song contest, I thought the theme should be voices. And so, for the first time on these streams, I sing a couple of tunes! Also cheering my beloved neighboring country Norway. Read more 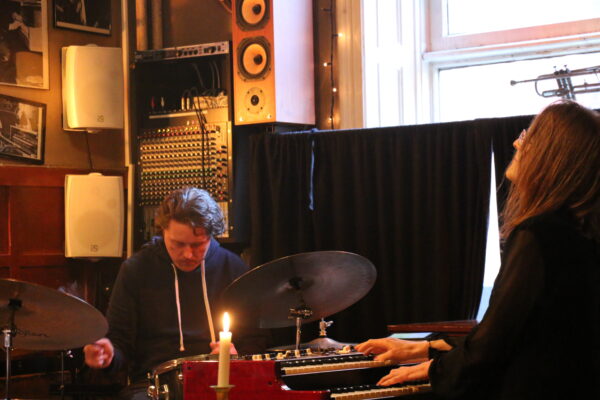 In these times it's really liberating to get out and play. Only going to Stockholm, about an hour away, feels like being on tour. And Glenn Miller Café is the perfect place to get all your ideas out of the system, especially in a duo setting. Read more
May 19th, 2021 8:00pm

Jazz at the HQ – Arnesen Bluesband

Arnesen Blues band har been around for almost 20 years and has a more modern approach to the blues, sometimes streching the boundaries towards other genres. In any case, it's a well oiled swinging machine! Read more
May 14th, 2021 6:00pm

The weekend after Ascension day and of the themes is flying, as Christ did to the heavens. Also celebrating the birthday of Stevie Wonder and others. Read more
May 8th, 2021 6:00pm

The day of victory in Europe in World war 2, in 1945. So let's take a look back and explore the music back then. Also, Keith Jarrett was born on that exact day and Groove Holmes had his birthday earlier in the week. Read more 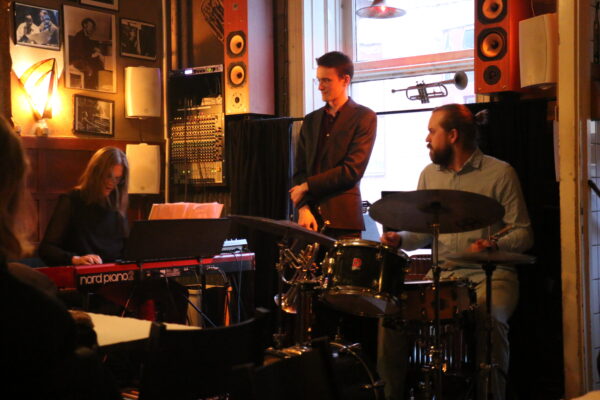 First "real" gig with this trio! Due to corona, we have only done streams so far so it was really nice to come out and play for a real audience! Read more
May 5th, 2021 8:00pm

This date was originally booked for Boheme, we had to cancel so instead we asked Erik Söderlind to join and do our repertoire S.H.O.P. Organ jazz of the 50s and 60s. Hard swinging straight ahead jazz in the spirit of Jimmy Smith, Jimmy McGriff, Jack McDuff and others. So much fun! Read more
May 1st, 2021 12:00am

The international day of workers, right after the international jazz day. What a an interesting combination! There are also some birthdays to celebrate, for example Duke Ellington and Toots Tielemans. Needless to to say, it wasn't that hard to find songs to play for this stream. Read more
April 24th, 2021 6:00pm

In this day, April 24th, in 1934, Laurens Hammond filed the patent for the Hammond organ. I wonder if he could ever imagine what he was about to create? So this is a celebration to that. Read more
April 21st, 2021 6:00pm

Jazz at the HQ – Apan & Grisen

I've been looking forward to this stream. Partly because I really enjoy the organ and drums format, partly because I get to play a lot of my own music. Daniel plays on both my records and we have a long history together, so there's a lot of material to choose from. Read more
April 17th, 2021 6:00pm

The 100th day of 2021! How are we doing so far? Not that bad I think, although I did expect that we'd be further along fighting the pandemic. But what good is that vaccines are being distributed all across the globe. This day, April 10th is also the birthday of organ giant Joey DeFrancesco and that of course needs to be regognized. But the were also some other significant jazz birthday this past week. Read more
April 7th, 2021 8:00pm

Jazz at the HQ – Claes Janson

Playing with Claes is always a joy and the duo format makes it even more intimate and playful. This was a great third edition of "Jazz at the HQ" Read more
April 3rd, 2021 6:00pm

Celebrating Easter with my extended family of viewers all around the world, observing the birthdays of Jimmy McGriff, Eric Clapton and Harb Alpert as well as some musical candy handout in form of requested songs. Read more
March 27th, 2021 6:00pm

Going red stream on the Hammond B3

Sometimes it's really easy to find a theme for the stream. This was definitely one of those times. A color is often a good starting point and with the red dress the choice was obvious. Also celebrating birthdays of Aretha Franklin and Ben Webster. Read more
March 24th, 2021 8:00pm

Jazz at the HQ – Trinity

hen I decided to do my Wednesday band streams, Trinity was the first band to be booked. This trio is truly one of the cornerstones of my musical life. We've been playing together for more than 15 years and released 4 albums so far. Due to corona we havne't played together since October so this was a welcome reunion in that sense as well. Read more
March 20th, 2021 6:00pm

This Saturday is the very date for the spring equinox. A point of balance between light and dark. A day of unity in the sense that day and night is equally long all across the globe. And here on the northern hemisphere - we're also heading towards lighter times! Read more
March 13th, 2021 6:00pm

Monday of this week was March 8th, the International Women's day. And so I thought it might be nice to honor some of the female jazz organists the I have listened to over the years, like Shirley Scott, Rhoda Scott, Trudy Pitts and the Swedish queen of the Hammond Merit Hemmingsson. Also recognizing the birthday of Wes Montgomery and the 7th anniversary of Trinity's release "Three". Read more
March 10th, 2021 8:00pm

Today was really exciting! First concert in a new series of band streams, called Wednesday jazz at the HQ. It felt like turning the studio into my very own jazz club. Every other Wednesday there'll be a streamed concert with one of the bands with whom I play. First up - a trio that was formed in the summer of 2020, with Erik Tengholm and Oscar Johansson-Werre. And I actually don't play the organ! Read more
March 6th, 2021 6:00pm

Blue velvet stream on the Hammond B3

The theme for this stream was easy. As soon as I'd taken the picture the week before I saw the blue color stocking out so much I thought that would have to be the theme. So, a few blues tunes, and the actual songs Blue velvet, and some other stuff as well. A lot of fun! Read more
February 27th, 2021 6:00pm

Springtime stream on the Hammond B3

A springtime stream indeed! The last couple of days has been some really beautiful spring days. The snow has melted, the sun is shining and even though it's windy, they aren't cold winter winds anymore. Except spring I also wanted to celebrate the birthdays of George Harrison, Fats Domino and Max Martin. Read more
February 20th, 2021 6:00pm

At this time one year ago, everything was just rockin'. I had made a small tour with Trinity earlier in the week. Over the weekend I went to celebrate my dad's 80th birthday by throwing him a party, bring the B3 and play some of his favorite organ tunes. the week after the was a short tour with Kiralina Trio. After that everything went blank in the calendar. So, after a year with corona I thought a suitable theme could be to have some nostalgia and remember the times before. Read more
February 13th, 2021 6:00pm

On the day before Valentine's day, the theme has to be love. So I got to play some of my favorite love songs. Also a tribute to Chick Corea, who sadly passed away this week. Read more
February 6th, 2021 6:00pm

Back at the B3 livestream

After 2 weeks on the XK5 it was nice being back at the B3. Celebrating Joe Sample and Joshua Redan, as well as playing a few tunes from "Groundhog day" and some Swedish 60s schlager . Read more
January 30th, 2021 6:00pm

On the rockish side Hammond stream

Another stream at the XK5 classic! This one a littre more rockish than the previous. Also feeling a little nostalgic that it was one year ago I could play with my trio so I included a couple of my own songs as well. Read more