Swedish Hammond phenomenon Andreas Hellkvist offers, with his second solo album, a fresh take on the sound and the style of the organ trio format. A journey into jazz and neighboring genres with compositions of his own. Although centered around the Hammond organ, his fellow musicians Samuel Hällkvist on guitar and Daniel Olsson on drums, each in their own way, play significant roles in shaping the sound of the trio. Together they create music that is both groovy and uplifting, heartfelt and deep.

Andreas Hellkvist was, at first, hesitant to embark upon a serious study of instrumental music until he heard the sound of the Hammond B3 organ played by Pierre Sward in their home town of Borlange, Sweden. It was Pierre who first showed Andreas how to use the drawbars of the organ and utilize the speeds of the Leslie speaker. Once, saddled to his own Hammond, Andreas was off and running on his own musical journey into the Land of Organ Jazz.

My first introduction to Andreas’ recorded music was with his 2003 release entitled, ‘The Hammond Project’. This was followed by several wonderful recordings under the moniker ‘Trinity’. Finally, I added to my collection, Andreas’s 2016 release from DO Music Records called ‘Finally!’ Thanks to Andreas gifting me these recordings, I have been able to follow thevolution of his sound and appreciate the tenacity and pure talent that he possesses. I’ve always heard the intrinsic connection Andreas has had to the organ and, like his mentor, Pierre Sward, realized his remarkable awareness of bass lines and the full capacity of both the vintage Hammond organ and its digital offspring. This, together with the high level of communication between Andreas and Samuel and Daniel, creates an astounding musical experience.

The song-list within this CD includes a most interesting array of musical moods and styles with Andreas’ patented funk, fire and finesse. Creating the best possible recording environment was crucial and therefore Andreas arranged for the trio to be situated in the same room. He explains: “I had one Leslie 122 behind me, and another Leslie 142 between Daniel and Samuel. Samuel’s amp was next to him. The music was all recorded live without headphones. It felt liberating and the sound filling the room was almost a transcendental experience. We tried to capture as much of it as possible in the mix and since the Leslies rotated most of the time, we managed to create a wide sound that I liked. It was like having the organ embracing the other instruments”.

Andreas and company begin this session with ‘Let’s Get Together’ – a high energy excursion on the rock-ish side of jazz organ. This track reminded me of my first ride in a Tesla automobile where my body was pinned to the seat from the sheer force of the energy. The electricity between the organ and guitar, together with the tempo shifts, give this ride a most exciting entrance.

‘Phases’ takes us in an entirely different space with its soft and introspective mood. The ethereal sound created by these three musicians leads us through time and space in stages, offering beautiful changes and fluid lines that mesh well together. The resolution felt at the end is convincing.

‘Just Flowin’ gives us a fun and up-lifting musical jaunt that is sure to please all. Repetitive lines and a bright bridge bring a kind of resilience to this tune as it bounces and weaves and ultimately morphs into a ‘churchy’ piece that takes us home in style.

Another platform for smooth and mellow organ jazz is found in ‘Snowflakes’. This track can be realized as a true cross-over tune that can move in a variety of directions. There is nice use of the Leslie and an eloquent sharing of space between guitar and organ.

With ‘Fall’, I hear a more modern mood that is charming yet mysterious. There is a searching quality to this music which could very well be used as a movie sound track. The changes are beautiful and the commitment made by these musicians is pronounced.

With obvious respect for the funky organists and keyboardists that preceded him, Andreas brings us ‘Tritlar’. This ‘Rock-It-style’ groove reminds me of the bar that was set in the 1980’s. Just when we feel that there will be no stopping on this musical journey, Andreas slows us down to catch our breath and recalculate our direction. It’s funky and it’s fun but always possessive of Andreas’ signature sound.

Repeating a comfortable phrase and allowing listeners to familiarize themselves with his groove are characteristics of Andreas’ music. Jesus’ is one such tune with its pleasing tone and enchanting mood.

One gets the impression that Andreas is a devoted musician who knows how and where the organ best conveys its message. His connection to his guitarist and drummer is on a metaphysical level and it allows this music to transcend the page and float, effortlessly, within space. There is sanctity in its delivery and purity in its presence. For Andreas this recording is meant to reflect both his musical and personal journeys to date. It has been about rediscovering, as well as working to fruition. I think we can all agree that these goals have been accomplished.

With the release of Finally! in 2016, I felt I was entering a whole new chapter of my musical life. It was long overdue, hence the title. But the way it materialized, I’m not sure it could have been done any earlier or faster. Sometimes the process has to run its course, take its time and mature. At least that’s what I like to tell myself.

Since the album featured 3 different guitar players, I had 3 potential trios to work with. Though, it was clear that when it comes to my own music, I wanted to have Samuel Hällkvist on guitar and Daniel Olsson on drums. That’s the trio that best can capture the diversity of the repertoire. And since we have known each other and played together occasionally for about 20 years, it felt a little like ”getting the band back together”.

One of the first tours we did was a week in Iceland in the summer following the release. That tour in many ways brought us together again as a group and forged this trio. Now, three years later, some traces of that are still present. The song Trìtlar was named after my favorite Icelandic candy, of which we consumed a whole lot. In many ways that song also represents this group. The initial idea – the bass line, emerged during my early years of organ practice, which makes it as old our friendships. The song itself contains a variety of grooves, moods and dynamics, showing a spectrum of the sound of the group. And lastly, it is also the only song where everyone in the trio is featured in a solo. The photo covering the backside of the album was taken in the middle of the tour in a living room of a house in Stykkisholmur. I like the image of us three sitting comfortably together gazing out over the landscape, amazed by its vastness and beauty. Like the music we’re about to discover and create.

During these three years, apart from the trio taking shape, a lot of things happen on the individual level as well. New ideas emerge, old ideas are rediscovered and some darlings are killed along the way. I’m happy to present a few brand new songs that represents the music currently flowing from within. Some of the songs has been around for a while but have not been previously recorded. Two of the songs were also on Finally!, but without guitar, so wanted to record them again with Samuel. Though they all differ quite a lot stylisticly, I feel each one of them represent some side of me and my musicality. Together they form a palette of the various ways of how I like to utilize the Hammond B3 and the organ trio format. I’m also excited to make my first release on my own label. I hope to make it my creative outlet for realizing and recording ideas I have and projects I’m involved in.

And as the music evolves, life itself continuously unfolds. In a way they are parallel universes, but they do intertwine and affect each other. The making of this album has coincided with a personal journey of my own, but the essence is the same for both – to trust and embrace what comes from within and to bring it out to the world, whether it’s in the form of music, appearance or a general outlook on things. Step by step, things fall into place. There is a direction from what has come before, although the end goal might not be that obvious or even known. But with each step the inner vision materializes a little more. And so, the title Becoming was chosen to reflect these processes.

I feel blessed to be surrounded by so many wonderful people, and I’m utterly thankful for all the love and support that’s constantly there. That’s what keeps me going. I can’t mention all by name but I hope you know who you are. A few special thanks to those involved in this production – Palli Kristmundsson for photos and overall practical and moral support, Janne Jutila for capturing the recording magic, Nicke Widén for commitment and patience in the mixing, Eric James for swift and skillful mastering, Daniel Lantz and Ingemar Bergman for support and feedback, Katalin for the photo shoot location and of course my fellow musicians, Samuel Hällkvist and Daniel Olsson.

I wanted to capture the sound of how two Leslie cabinets fill a room. Therefore, the setup in the studio was crucial.

We were all in he same room. I had one leslie (122) behind me, and another leslie (142P) between Daniel and Samuel and Samuel’s amp just next to him. In the making of Finally!, me and sound engineer Janne Jutila had developed our own way of recording a Leslie, and here we could take that even a step further.

We recorded live without headphones. It felt liberating, the way the sound filled the room was almost a transcendental experience. We tried to capture as much of it as possible in the mix and I think. we managed to create a wide sound that I like. Like having the organ embracing the other instruments. 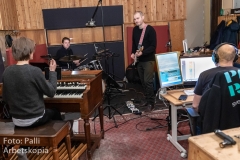 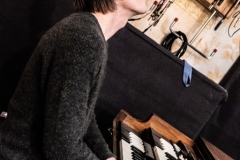 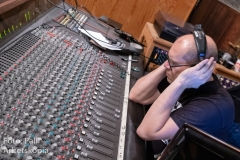 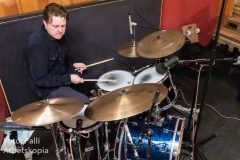 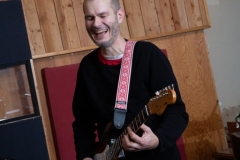 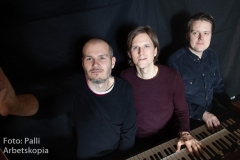 On the actual release date, Nov 1st, Andreas and photographer Palli Kristmundsson will go to Iceland for a week. The dates weren’t planned to coincide – the original plan was to get the album out much sooner. But given the significance of Iceland in the making of this album (as described in Andreas’ own notes), it seems only logical that they do.

Andreas will make a few concerts there. Alhough not with the trio, still a kind of extended release tour. The dates so far are

Some pictures from a previous Iceland tour 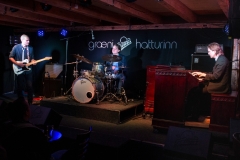 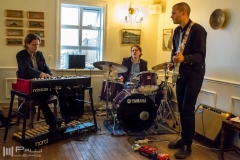 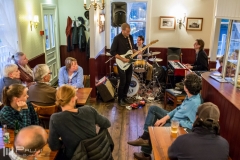 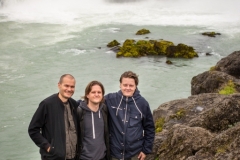 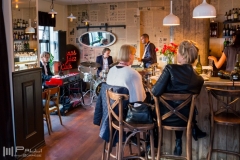 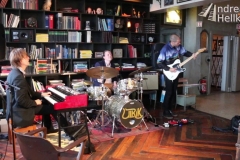